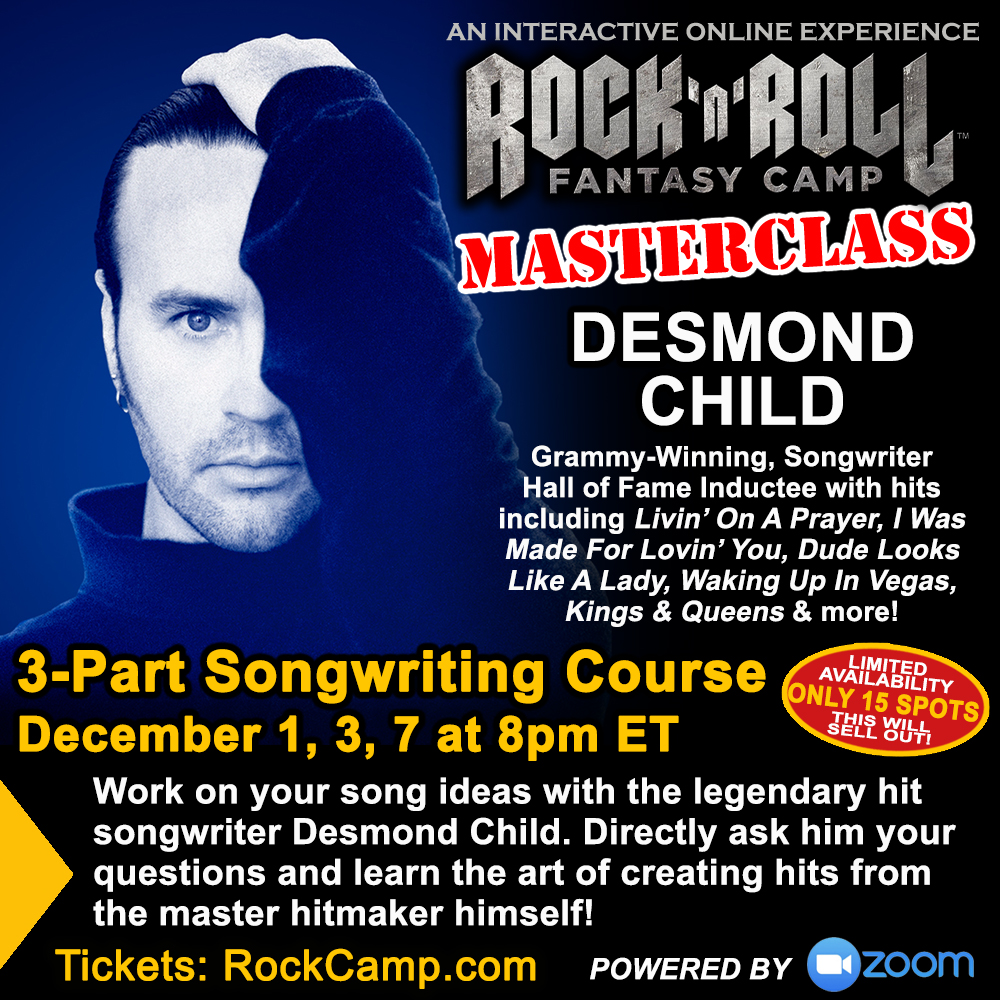 Work on your song ideas with the legendary hit songwriter Desmond Child. Directly ask him your questions and learn the art of creating hits from the master hitmaker himself!

GET TICKETS NOW
About Desmond Child:

Grammy-winning and Emmy nominated songwriter-producer Desmond Child is one of music’s most prolific and accomplished hitmakers. He’s a film, television and music producer, recording artist, performer, and author. His credits appear on more than eighty Billboard Top 40 singles spanning five decades, including “Livin’ On A Prayer,” “You Give Love A Bad Name,” “I Was Made For Lovin’ You,” “Dude Looks Like A Lady,” “Angel,” “I Hate Myself For Loving You,” “Livin’ La Vida Loca,” “The Cup Of Life,” “Waking Up In Vegas” and many more.

Desmond Child was inducted into the Songwriters Hall of Fame in 2008 and serves on its Board of Directors as well as the Board of ASCAP. In 2018 he received ASCAP’s prestigious Founders Award celebrating 40 years as a proud member of ASCAP. He also co-founded the Latin Songwriters Hall Of Fame where he serves as Chairman Emeritus.

He recently wrote and co-produced “Lady Liberty” on Barbra Streisand’s latest album “WALLS.” He also released his album DESMOND CHILD LIVE in October 2019 on BMG Rights and currently has the #1 Euro Airplay hit “Kings & Queens” with Ava Max. Child and his pop band Desmond Child & Rouge will be releasing 2 re-mastered albums, DESMOND CHILD & ROUGE and RUNNERS IN THE NIGHT on October 16, 2020 and a new remake of their top 40 hit single “OUR LOVE IS INSANE XX” on October 23, 2020 on BMG Rights. Child released a new single “VIVA LA DIVA” Ft. Countess Luann from The Real Housewives Of New York City on August 21, 2020 on BMG Rights. Child and the song were featured in the season finale on Bravo TV on September 3, 2020. He has also recently completed his autobiography LIVIN’ ON A PRAYER: BIG SONGS BIG LIFE with David Ritz.