Grammy winning and Emmy nominated songwriter-producer Desmond Child is one of music’s most accomplished hitmakers. He’s a film, television and music producer, recording artist, performer, author and motivational speaker. His credits appear on more than eighty Billboard Top 40 singles spanning five decades, including “Livin’ On A Prayer,” “You Give Love A Bad Name,” “I Was Made For Lovin’ You,” “Dude Looks Like A Lady,” “Livin’ La Vida Loca,” “Waking Up In Vegas.” and many more. From Aerosmith to Zedd, his genre-defying collaborations include Bon Jovi, KISS, Cher, Joan Jett, Alice Cooper, Michael Bolton, Ricky Martin, Katy Perry, Kelly Clarkson, Carrie Underwood, Garth Brooks, Meat Loaf, Cyndi Lauper, Christina Aguilera, Sia, Mickey Mouse and Kermit the Frog, selling over 500 million records worldwide with downloads, YouTube views and streaming plays in the billions. Desmond Child was inducted into the Songwriters Hall of Fame and serves on its Board of Directors as well as the Board of ASCAP. In 2018, he received ASCAP’s prestigious Founders Award celebrating 40 years as a proud member of ASCAP. He also co-founded the Latin Songwriters Hall Of Fame where he serves as Chairman Emeritus. Child has recently completed his upcoming autobiography LIVIN’ ON A PRAYER: BIG SONGS BIG LIFE with David Ritz. He also wrote and co-produced “Lady Liberty” on Barbra Streisand’s new album “WALLS.” His new album DESMOND CHILD LIVE was released on October 25, 2019 on BMG Rights. 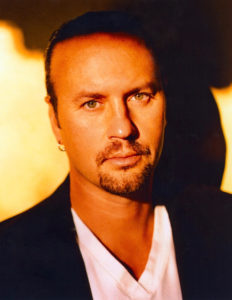 Grammy winning and Emmy nominated songwriter-producer Desmond Child is one of music’s most accomplished hitmakers. He is also a film/television producer, recording artist, performer and motivational speaker. His credits appear on more than eighty Billboard Top 40 singles spanning five decades.

Desmond’s musical lineage is deep. His Cuban mother, Elena Casals, was a celebrated songwriter and published poet. His aunt was internationally acclaimed Olga Guillot the legendary Queen of Bolero.

The next major move: a sensational collaboration with Paul Stanley, resulting in two of KISS’ most enduring hits: “I Was Made for Lovin’ You” and “Heaven’s On Fire.”

When Bon Jovi came calling, the New Jersey rockers had yet to hit #1. With Desmond joining the writing team of Jon Bon Jovi and Richie Sambora, everything changed. “You Give Love A Bad Name,” “Livin’ On A Prayer” and “Bad Medicine” all climbed to the top of the charts, and became international smashes.

That was only beginning. Desmond hooked up with Steven Tyler and Joe Perry to write “Dude Looks Like A Lady” and, with Tyler, “Angel.” And then the list only gets longer: He and Joan Jett turned out “I Hate Myself For Loving You.” He and Alice Cooper cooked up “Poison.” And back with Jon and Richie, he penned Cher’s “We All Sleep Alone.”

A move to Miami Beach once again changed the game. This time Desmond together with Draco Rosa ignited the Latin Music explosion, with the global #1 hits they co-wrote and produced for Ricky Martin: “Livin’ La Vida Loca” and the World Cup theme: “The Cup of Life.”

Child was inducted into the Songwriters Hall of Fame in 2008 and serves on its Board of Directors as well as the Board of ASCAP. In 2018 he received ASCAP’s prestigious Founders Award celebrating 40 years as a proud member of ASCAP. Along with songwriter-producer Rudy Pérez he co-founded the Latin Songwriters Hall Of Fame where he serves as Chairman Emeritus.

The first time we met, we wrote 'Angel' in about an hour and 45 minutes -­‐ and I'm not bullshitting.
The guy's a f#@king genius.

The Desmond you don’t know about, is the one who not only taught me the next level of songwriting, but so many of the true aspects of friendship: truth, honor and loyalty. We’ve been through a lot together – the ups and downs…and ups again.

Desmond is the perfect songwriter. Neither styles in music nor trends and fads have ever held him back from doing what he does best, which is craft a song like nobody else can. I have to honestly say he has completely floored me with his songwriting craftsmanship. I admire him and applaud him.

Desmond is a genius for tapping into a performer’s persona to create music that is intensely commercial without compromising the artist’s integrity.

Desmond is a slave-driving slut.

Child’s experience as a recording artist would soon play a role in his songwriting future. His songs caught the ear of KISS guitarist Paul Stanley, who asked Desmond to co-­write a track for the band’s 1979 Dynasty album. The result was “I Was Made For Lovin’ You,” which is still one of the biggest hits in the KISS catalogue. Paul Stanley then passed Child’s phone number to New Jersey rockers Jon Bon Jovi and Richie Sambora. Jon called Desmond and the three ended up in the basement of Sambora’s parents’ house, where they penned Bon Jovi’s first number-­one single, “You Give Love A Bad Name.” The collaborations continued and they followed with two more chart-­toppers: “Livin’ On A Prayer” from the band’s breakthrough album Slippery When Wet and “Bad Medicine” from the follow-up album, “New Jersey”.

Child soon began duplicating the feat with other major artists. He hooked up with Aerosmith and wrote “Dude Looks Like A Lady” & “Angel” (from the their 1987 comeback album, Permanent Vacation), “What It Takes” (Pump, 1989), and “Crazy” (Get A Grip, 1993). During the same period, he co-­wrote Joan Jett’s “I Hate Myself for Loving You” and all of the tracks on Alice Cooper’s Trash album (including the hit single “Poison”). At this point, Desmond began branching out from his rock base, co-­writing Michael Bolton’s “How Can We Be Lovers,” as well as, co-­writing and producing “Just Like Jesse James” and “We All Sleep Alone” for Cher. In the midst of all of his success, he also found time to record the solo album Discipline (Elektra, 1991), which contained his own Top 40 hit, “Love On A Rooftop.” In the late ’90s Child returned to his Latin heritage via collaborations with Ricky Martin. Their efforts resulted in the number-one worldwide smash “Livin’ La Vida Loca.” The two also scored big with the 1998 World Cup Theme “The Cup Of Life,” which was #1 in 22 countries. This success carved the way for several more hits and Grammy nominations on Ricky Martin (Columbia, 1999), Sound Loaded (C2, 2002) and more recently M.A.S Musica+Alma+Sexo (Sony Latin, 2011).

Despite having worked for nearly forty years as a writer, producer, and artist, Child remains energized and enthusiastic… ready to create hits indefinitely. “I was born with a certain drive and sense of destiny that keeps me going,” says Child. “Maybe it was because I was born poor; I wanted to win for the family. I still put a lot of energy in what I do. I try to really live life, so I have new experiences that I can write about.” More than twenty years after the number one beginning in that New Jersey basement, Desmond Child remains as in-­demand as ever. His latest projects include: Katy Perry’s #1 2008 hit “Waking Up In Vegas”, Alice Cooper,Barbra Streisand, Kristin Chenoweth, Aerosmith, Ricky Martin, Miranda Cosgrove, Weezer, Paul Stanley, The Rasmus, Tokio Hotel, Rock Mafia, and his old pals in Bon Jovi. “The Desmond you don’t know about,” says Jon Bon Jovi, “is the one who not only taught me the next level of songwriting, but so many of the true aspects of friendship: truth, honor and loyalty. We’ve been through a lot together…the ups and the downs…and the ups again.”