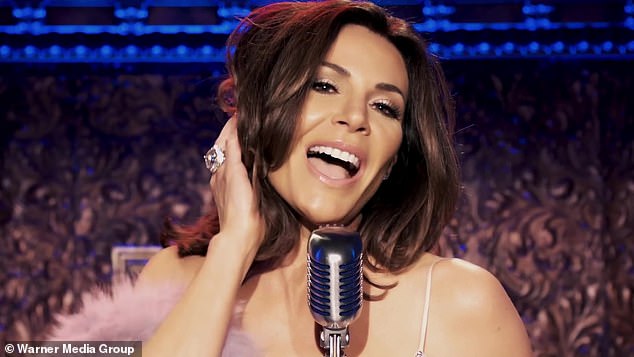 The 55-year-old returned to her cabaret roots in the video which saw in her in a beaded dress taking the stage at Feinstein’s/54 Below in New York City.

Her latest song was in partnership Grammy-winning songwriter and producer Desmond Child and the video was directed by Evan Hungate and shot by Jerry Chia.

New release: Countess Luann de Lesseps released the her latest music video Viva La Diva on Friday, which shows her returning to the stage of Feinstein’s/54 Below in New York City

‘If you want the truth, and nothing but the truth / Someone’s gotta set you straight,’ she speaks to the camera in a dark suit-style dress. ‘I told you money doesn’t buy you class / But a diva has needs / See these, they didn’t grow on trees.

As the song kicks off, she sits on stage at the club, where she first started in cabaret, in a black v-neck dress as the video remains in black and white.

‘It’s an homage to NYC and my rise to the cabaret stage,’ she told People of the video.

She continues to sing over a montage of New York, and scenes of her stepping out of a car heading inside.

For the chorus, the bright stage lights come on and color is brought into the video.

She takes to the microphone in a bright silver shimmering dress, with a deep cupped neckline and a thigh-high slit.

Luann looks glamorous adding a purple fur wrap to her arms, as she dons a full face of flawless glam makeup to sing and dance on stage.

With high energy she sings the chorus ‘Viva la diva, viva la diva / Here’s to the diva deep in you… Let’s give somе diva attitude…Let the diva livе in you.’

The video continues to flash between the scenes of her singing on stage in color, and black and white scenes of the city and her running down a hallway.

‘Everyone has gone through hard times in their life, especially nowadays,’ she told People about the song.

Adding: ‘I believe the diva in all of us is what gets us through. Strength, courage and the ability to be the captain of your own ship without making excuses for being who we are.’

With lyrics including ‘I’m not ashamed / I never look back…Well let me tell you something ladies / You deserve a piece of the pie / Your penthouse, you in the sky,’ she clearly is giving strong diva vibes.

She said ‘I hope the fans will connect to their inner diva when they hear the lyrics.’

The video was shot on a COVID-19 safe set of two people as the pandemic continues.

And as for making of the song Desmond Child said he was surprised at her focus on work ethic.

‘I was taken by surprise that Luann was definitely not a diva in the studio, came totally prepared, in a fantastic mood and ready to work,’ he told the magazine. It was one of the easiest recording sessions of my career.’

Viva La Diva is Luann’s fifth single, following 2019’s Feelin’ Jovani, she has yet to release a full length album.