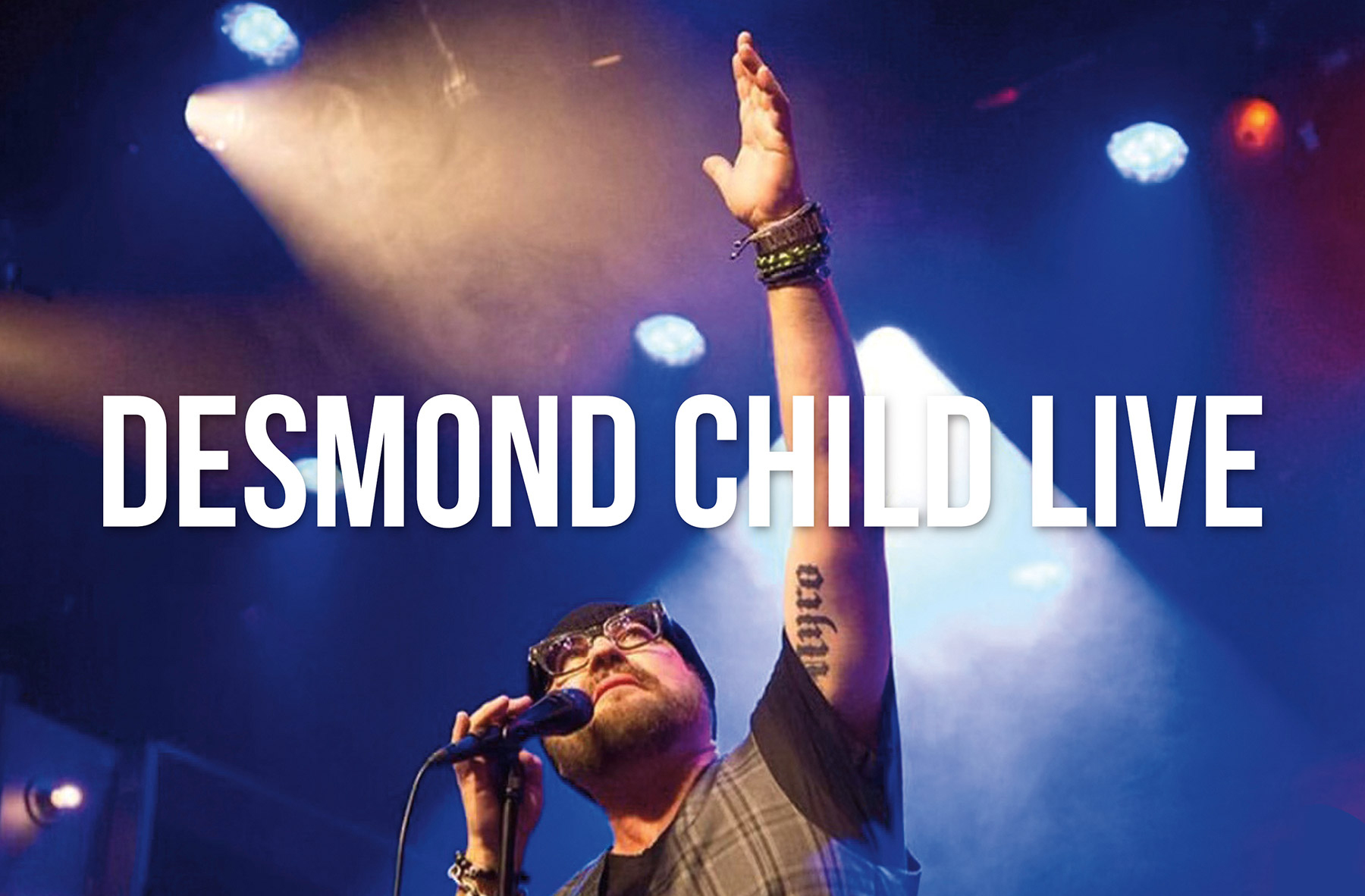 Desmond Child has enough hits to fill a jukebox — several times over. The Grammy-winning songwriter has notched an astonishing 80 entries on the Billboard Top 40 over the course of his five-decade career, during which time he’s penned classics for some of the biggest movers and shakers in music history. Bon Jovi, Cher, Aerosmith, KISS, Kelly Clarkson, Sia, Garth Brooks, Katy Perry, Christina Aguilera, Ricky Martin and so many more have given voice to his songs, which have sold over 500 million records worldwide and racked up billions of streams.

On Friday, the 65-year-old released his first live album, Desmond Child Live. Recorded at New York’s iconic Feinstein’s/54 Below (formerly home to the famous Studio 54 disco), the album features Child tackling some of his biggest smashes, including “Livin’ La Vida Loca,” “Livin’ on a Prayer” and so many more. In honor of the new release (and his upcoming memoir cowritten with David Ritz due out in 2020) PEOPLE presents the stories behind some of his most famous songs — in Child’s own words.

“Livin’ on a Prayer” was one of the first songs I co-wrote with Jon Bon Jovi and Richie Sambora when their band, Bon Jovi, was getting ready to record their third album, Slippery When Wet. It’s the story of Tommy and Gina, a struggling couple who keep each other going by hanging on a thread of hope. I think each of us brought a little of our own story to the song.

In my case, I was thinking about the early hungry years in N.Y.C. in the late 1970s with my girlfriend, Maria Vidal, who was also co-founder of our band, Desmond Child & Rouge. Maria worked as a singing waitress at a joint called Once Upon a Stove, where they named her Gina Velvet. I stayed home writing songs and she worked “to bring home her pay for love.” After Bon Jovi did the demo, Jon wasn’t sure about putting it on the album because he felt it was a bit sentimental and didn’t fit with the hard-edged arena rock direction they were headed in. But Richie and I realized early on that this was a very special song and literally got on our hands and knees, half joking and half not, begging Jon to keep it on the record. The rest is history.

Today, “Livin’ on a Prayer” has become the number one anthem of hope for all time … and the number one song played in strip clubs and bars at the end of the night to get people on their feet and out the door. I’m not kidding. In fact, we once got a letter from a guy who had decided to end his life and had pulled up at a bridge leaving the car still running. As he prepared to jump, “Livin’ on a Prayer,” his favorite song, came on the radio, so he decided to get back in to hear it one last time. By the time the modulation kicked in at the last chorus, he drove home. So Bon Jovi has actually saved a life!

After having had my huge winning streak with Bon Jovi, I was asked to travel to Boston to work with Aerosmith by legendary A&R man John Kalodner at Geffen Records. The band had never collaborated with an outside writer before and I was imposed upon them by the label. So I walked into this giant industrial warehouse where the band was set up with a fully equipped stage, including mountainous stacks of Marshall amps and a singular lead vocal mic festooned with Steven Tyler‘s signature long flowing tie-dyed scarves. On the floor were neatly assembled rows of over 100 guitars standing at attention like soldiers in every shape and sparkly rock star finish imaginable.

Steven warmly greeted me with his enormous smile and introduced me to a stand-offish Joe Perry. They played me a backwards guitar loop that sounded like a boogie blues harmonica and Steven began singing “Cruisin’ for the ladies, da-dap da-dap… cruisin’ for the ladies” and asked me what I thought. The first words out of my mouth were: “I think that really sucks. It sounds like a bad Van Halen cast off they wouldn’t even put on the worst record of their enemy.” Now with his ire up and arms crossed over his chest, Joe looked like he was ready to have me escorted out the door by the roadies.

Steven jumped in and sheepishly admitted that he had mistaken blonde mullet-topped Vince Neil of the band Mötley Crüe for a hot chick from behind at a bar and started to sing “Dude looks like a lady.” I lit up and said, “Now THAT’S a hit song title!” Joe finally spoke up and flatly said, “But we don’t know what means.” I said “I know what that means,” and talked them into the premise of an average guy who “cruised into a bar on the shore” and falls head over heels in love with the curvaceous stripper on stage, only to later find out that “she” was a “he”… but goes for it anyway. Thus the lyrics, “Never judge a book by its cover, or who you gonna love by your lover,” and “My funky lady I like it, like it, like it like that.”

The idea of a transgendered character in a hit song being shown in a positive light was completely fresh and revolutionary. It was so catchy that even without knowing what the song was about, people everywhere started spontaneously singing it at the top of their lungs. Even Mrs. Doubtfire was doing the broom dance to it and every little kid in America could sing all the words by heart. I heard one drunk guy on the street yelling, “Do a naked lady” — I guess that’s what he probably wanted it to say. The other side of a song is the listener who always brings their own story to a song no matter what it’s saying. The success of “Dude Looks Like a Lady” brought Aerosmith back big time and ushered in an unstoppable wave of hit after hit from one of the world’s greatest and most enduring bands. Aerosmith took a big risk and won — so did I.

Ricky Martin exploded all over Latin America with his solo career after having aged out of the Puerto Rican boy band Menudo and set his sights on the U.S. and international market. He needed a smash cross-over single for his debut English-language album, so I got together with his producer, Draco Rosa, and we got fascinated with the idea of Ricky as the “Latin Elvis.” But why stop there? Sinatra had just passed away and his records were playing all over the airwaves. Ricky had his own version of that sexy Elvis and Sinatra swag.

Ricky’s manager was urging us to write what he termed a “Spanglish” anthem that everyone in the world could understand. So Draco and I cooked up a Rat Pack/James Bond horn-heavy Latin dance track called “Livin’ the Vida Loca.” It was cited by the Wall Street Journal as first ever 100 percent digitally recorded and produced song to reach number one. When we delivered it to the label they asked for an English version and I told them it IS in English — only the title has a couple of Spanish words. Ever heard of El Pollo Loco? Of course when the record was released the label made sure that under “Livin’ La Vida Loca” were the words “Living the Crazy Life,” written in big bold letters. The record went crazy: Billboard, MTV, Grammys and ASCAP awards, you name ‘em. Ricky’s first English-language album was a sensation, selling over 15 million copies in the first year!

Katy Perry is one of the most extraordinary artists of our times. When I met her she had been an integral part of a band created by a production team called the Matrix, responsible for Avril Lavigne’s first album. After leaving the Matrix she was signed to Columbia Records and Katy turned up for a writing session with me and Swedish hitmaker Andreas Carlsson. At the time, Alanis Morissette was a strong inspiration for Katy. That drew us to compose a dark and brooding rock ballad called, “My Last Cry.” Katy, though, was anything but dark and brooding. She was light-hearted and high-spirited. In the most loving sense and being gay myself, I saw her as the ultimate f– hag. “Why are we writing all this angry stuff?” I asked her. “You aren’t angry. You’re fun. You should be singing about the way you are. Let’s write a song about you and your gay best friend hitting Vegas and losing all your money.” And “Waking Up in Vegas,” was born and went straight to number one. I didn’t go straight, but that‘s another story…