LATIN SONGWRITERS HALL OF FAME IS BORN IN MIAMI 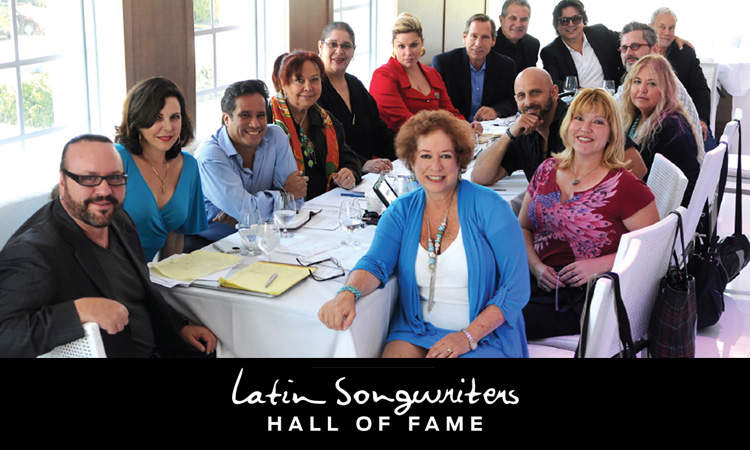 MIAMI, FL. (November 14, 2012) – To honor the greatest Latin songwriters of all time. To pay due tribute to the composers that have given the world so many timeless classics, and to inspire, foster and nurture new generations of song and wordsmiths so that they may continue creating Latin music that crosses all borders and touches the soul.

Those are just some of the goals of the newly created Latin Songwriters Hall of Fame (LSHOF), as envisioned by founding members and Grammy-award winning producer/songwriters Desmond Child and Rudy Pérez.

Based out of Miami, the world’s capital of Latin music, the Latin Songwriters Hall of Fame began as a dream. Un sueño.

A dream held for 16 years by Child and Pérez who, with the support of key figures in the music, entertainment, media relations, and publicity worlds, and under the auspices of the Songwriters Hall of Fame in New York City, got together on October 18, 2012, in South Beach, to make history and establish LSHOF.

Specifically, singers, songwriters, producers, recording engineers, music publishers, performing rights organization representatives, artist managers and music and television business executives joined forces to create a non-profit educational organization that Hispanics in the United States and everywhere around the world will be proud of.

This amazing journey began with a nominating committee choosing 24 names, of which 5 will be chosen as inductees. Ceremonies for both events will be announced soon!

To select those 24 candidates, from all regions of the Spanish and Portuguese-speaking worlds, was not an easy task. But handling that responsibility with the utmost respect and admiration was an executive committee that includes renowned producer, composer, musician and performer Desmond Child, as Chairman/CEO, Board of Directors of the Songwriters Hall of Fame; veteran music producer and songwriter Rudy Pérez as President; and led by Vice-Chairman of the Nominating Committee, Olga Maria Touzet Guillot as well as an Executive Board of Directors, with industry heavyweights Freddy DeMann, Eddy Cue, EmilioEstefan, Zach Horowitz, Phil Ramone, Sergio George, Tony Mojena, among others; a Board of Directors, featuring legendary record producer Jellybean Benítez as Vice-Chairman of Membership & Social Media, and other important colleagues; well-known publicists Charlie Cinnamon and Angela Rodríguez as Co-Vice-Chairpersons of Media and Public Relations, Leila Cobo (Executive Director Latin Content & Programming, Billboard) forms part of the Media Public Relations Group, Bruno del Granado (CEO RM Entertainment Group) has been named Co-Vice-Chairman of Television and Production, and many more movers and shakers of the music and entertainment industries.

The fruit of this labor of love is an international organization that will fill a void in the music business. Please stay tuned for further exciting developments of the Latin Songwriters Hall of Fame!

The First Board Meeting

Leaders in the Latin Music Industry joined together on October 18th, 2012 at the Marlin Hotel in Miami Beach to establish the Latin Songwriters Hall of Fame which is dedicated to educating, honoring and celebrating the lives and music of the world’s greatest Latin songwriters and composers. Along with the Masterclass In The Round series, workshops and scholarships one of the many functions of the Latin Songwriters Hall Of Fame is to recognize those whose work represents a spectrum of the most beloved songs in Spanish and Portuguese.

Each year the Latin Songwriters Hall of Fame inducts a slate of songwriters at the LA MUSA AWARDS Induction Gala that have been recognized throughout the world. These Inductees are selected from the pantheon of living and posthumous Latin Music greats and also honors those who have had a significant impact on the evolution, development and perpetuation of Latin music, language and culture.

To be eligible for induction into the Latin Songwriters Hall of Fame, the songwriter, composer or lyricist must have had their first significant world renowned song or composition released commercially, in the generally accepted sense of that phrase, at least 20 years prior to the year of induction; and have demonstrated unquestionable musical excellence. We also consider factors such as an artist’s musical influence on other artists, length and depth of career and the body of work, innovation and superiority in style and technique, but musical excellence shall be the essential qualification of induction.