The Number Ones: Bon Jovi’s “Livin’ On A Prayer”

By adminFebruary 4, 2021No Comments 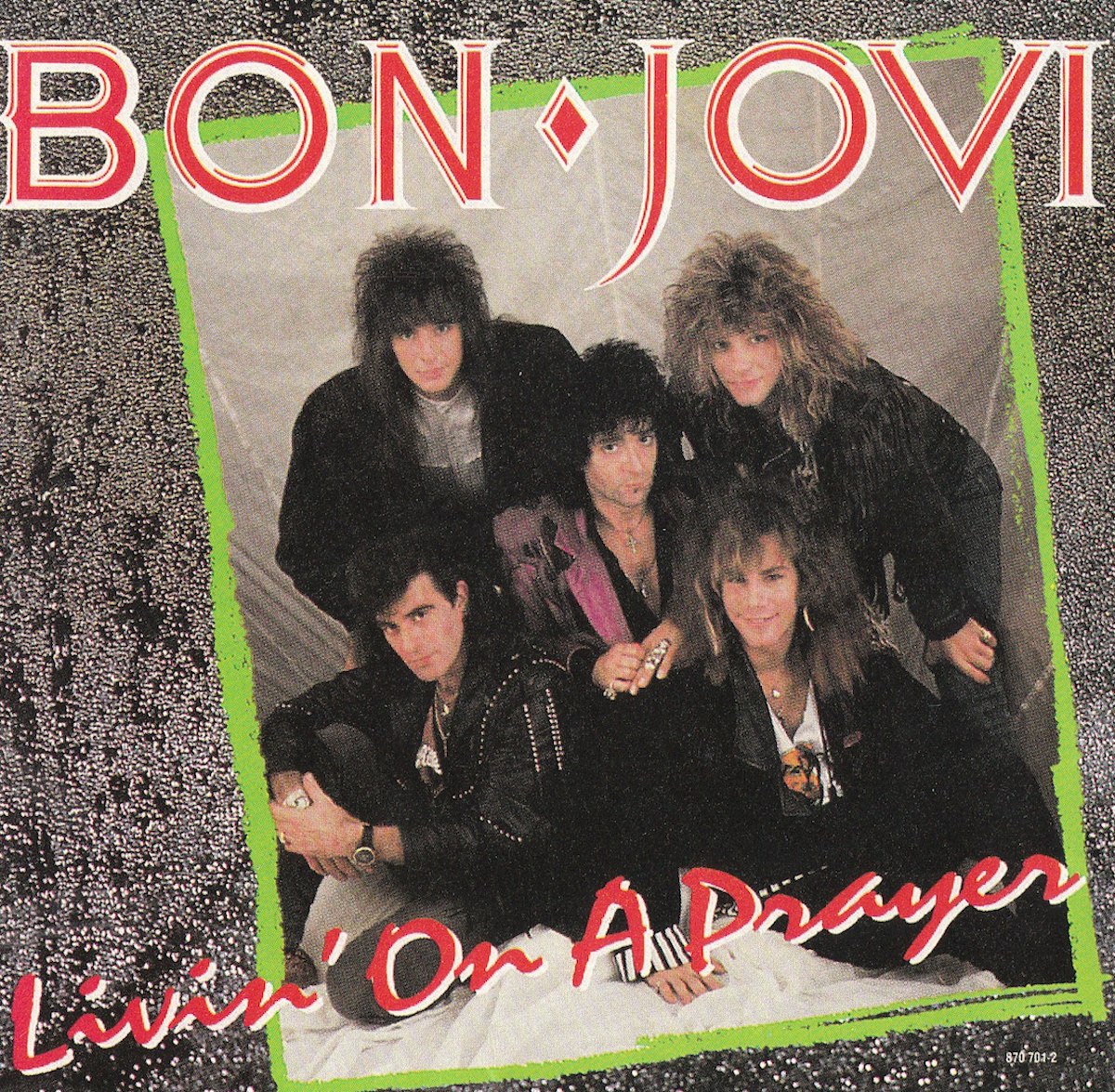 Original Article BY TOM BREIHAN In The Number Ones, I’m reviewing every single #1 single in the history of the Billboard Hot 100, starting with the chart’s beginning, in 1958, and working my way up into the present.

You might get that rush of recognition the second you hear the pillowy synth-drone. The serotonin should start kicking in at the first or second bass note. By the time that first talk-box whoa kicks on, you already know. You know everything. You know that Tommy used to work on the docks. You know that Gina works the diner all day. You know that you live for the fight when it’s all that you got. The whole saga is already lying dormant in your brain, waiting to be activated.A lot of the songs that this column covers are odd little time-capsules, faded Polaroids of half-forgotten cultural moments. A lot of the time, it’s hard to reconstruct why anyone gave a shit about some particular song at some particular moment. Some of those songs fade away completely. Others stick around as radio fodder, popping back up in your consciousness every so often. And then there are a few songs that never go away, that simply become part of our shared cultural experience. There aren’t too many of that last category, but “Livin’ On A Prayer” is one. When I near death and my brain dissolves into pink sleet, I will still know every word of “Livin’ On A Prayer.” It’s that kind of song.
111

Jon Bon Jovi had to be convinced that “Livin’ On A Prayer” should even make it onto his band’s album Slippery When Wet. Bon Jovi wrote “Livin’ On A Prayer” with his guitarist Richie Sambora and the hired-gun songwriter Desmond Child. The track came out of the same songwriting sessions that produced “You Give Love A Bad Name,” Bon Jovi’s first chart-topper. In an Irish Times interview just last week, Jon Bon Jovi said this of “Livin’ On A Prayer”: “I remember walking out of the room with Richie, and I said, ‘Eh, it’s OK. Maybe we should just put it on a movie soundtrack.’ Richie looked at me and said, ‘You’re an idiot. It’s really good.’”

According to Bon Jovi, the trio wrote “Livin’ On A Prayer” “on a day when none of us had any ideas.” They got to talking about all their backgrounds. Bon Jovi and Sambora had both grown up working-class in New Jersey. Bon Jovi’s high-school girlfriend had stayed with him as he tried to land a record contract. (They got married in 1989, and they’re still together now.) Desmond Child had worked as a cabdriver in New York in the ’70s, when he was dating Maria Vidal, one of the singers in his group Desmond Child & Rouge. Vidal worked in a diner, and her coworkers nicknamed her Gina because she looked like the actress Gina Lollobrigida. (Maria Vidal’s highest-charting single, 1984’s “Body Rock,” peaked at #48.)

When Child first came up with the “Livin’ On A Prayer” lyrics, the song told the story of a couple named Johnny, Child’s birth name, and Gina. Bon Jovi knew that wouldn’t work, since his name was Jon. The song had to be third-person. Child changed the guy’s name to Tommy, which is a better name anyway. (When I was six, I made one of my worst decisions ever, insisting that I wanted to go by “Tom” instead of “Tommy.” “Tommy” sounds so much cooler. Fuck.)

Even after that conversation with Richie Sambora, Jon Bon Jovi wasn’t really into “Livin’ On A Prayer.” Producer Bruce Fairbairn pushed hard for the song to appear on Slippery When Wet. In that Irish Times interview, Jon Bon Jovi says that the song “didn’t have that boom-boom-boom bassline yet, so it sounded more like the Clash.” The demo version of “Livin’ On A Prayer” sounds absolutely nothing like the Clash, and I can’t even imagine how Bon Jovi even got that into his head. But he’s right that it didn’t have that boom-boom-boom bassline. It didn’t have a lot of things.
333

The band and Fairbairn kept working on “Livin’ On A Prayer,” layering on more and more ideas: The synth-drone intro, the blazing guitar leads, the whoa-whoa-whoa talkbox riff. Fairbairn and Sambora found that talkbox while digging around in Sambora’s box of guitar effects. (From what I’ve read, the talkbox — a device built on a clear plastic chord that goes from your mouth to the guitar — really hurts to use. It makes your skull vibrate and your eyes feel like they’re going to explode. I love that.) The sound that the weird machine conjures — like a giant evil robot doing the bass voice in a street-corner doo-wop group — gives the song a whole new cinematic dimension.

The finished version of “Livin’ On A Prayer” is light-years beyond that demo. The song only really works if it’s all drama, if it explodes out of the speaker. However long it took, the band turned “Livin’ On A Prayer” into a perfect engine of drama. They shaped it into a true soul-shaking cheap-seats howler.

Tommy and Gina are pure archetype. Tommy used to work on the docks, but the union’s been on strike, and he’s down on his luck. It’s tough. So tough. Tommy can’t support himself and his girl, and he can’t even express himself artistically, since he’s got his six-string in hock. Gina works the diner all day, working for her man. She dreams of running away, but when she cries in the night, Tommy whispers, “Baby, it’s OK.” And then: “Someday.” That “someday” is a mythical time when things won’t be so hard. Tommy and Gina don’t know whether this time will ever arrive, but they have to believe in it. They have to believe they’re halfway there.

Bon Jovi himself has said that “Livin’ On A Prayer” was a response to the Reagan era and the suffering that so many people were going through. Reagan certainly did everything in his power to cripple organized labor in America; maybe that’s why Tommy’s union was on strike. But the lyrical concerns of “Livin’ On A Prayer” aren’t tied to any particular moment in history. They’re elementally simple, like an early-’60s girl-group song.

The music, on the other hand, is extremely of its moment. Even more than “You Give Love A Bad Name,” “Livin’ On A Prayer” is a terrifying display of supercharged ’80s pop-metal that just goes for the car-stereo jugular. The production is so clean you could eat off of it. The synths and guitars glitter and gleam. The bassline and the simplistic drum-stomp are practically disco. Everything on the song works as a hook. The verses sound like choruses, and the choruses sound like suns exploding.

Jon Bon Jovi gets clowned for being a bad singer, and he’s admittedly not Luther Vandross or whatever. But have you ever tried to sing “Livin’ On A Prayer”? I did it once, in a crowded karaoke bar in Red Hook, and I learned some hard lessons real quick. (I should clarify that I could charitably be described as a dogshit-ass singer. The mere fact that I had a microphone in public is an indictment of the entire concept of karaoke.) The song started up, and people seemed amped to hear it. I got through that opening verse feeling good. And then the chorus showed up and I suddenly realized that I could not scream that high. It just wasn’t in me. I struggled through, but then that key change came along and I was fucking done — out of breath, squeaky, pathetic, humiliated. I walked into that bar thinking I could do the things that Jon Bon Jovi had done. I could not. My man did his thing on that song.

It’s not just that Jon Bon Jovi hits the notes, though he does. It’s that he sells those notes. He doesn’t just convey the beaten-down seriousness of Tommy and Gina’s plight. He also embodies all the hope that they’re holding out. He throws himself into that chorus with total starry-eyed devotion.

Director Wayne Isham’s “Livin’ On A Prayer” video thankfully doesn’t attempt to dramatize the saga of Tommy and Gina. Instead, Isham goes all-in on Jon Bon Jovi’s charm and his impossible beauty. Isham filmed the video in an empty Grand Olympic Auditorium in Los Angeles, and Bon Jovi himself really plays it up. When he spins around and grins at the camera on the first line, you can practically hear cash registers ringing. Music-video shoots and soundchecks are two of the most boring ordeals in the entire economy of popular music, and yet all the members of Bon Jovi, Jon in particular, look like they’re having the time of their lives.

Near the end of the video, Jon tosses his hair, and everything changes. We know that Jon Bon Jovi did not magically transform black-and-white to color and summon a horde of fired-up fans with the simple flick of his mane, but the video gives us that illusion — just as those fans in that arena got the illusion that Jon Bon Jovi could actually fly over their heads like Superman. It’s just more fun to let the illusion sweep you away.

“You Give Love A Bad Name” had been the rare hard rock song to top the Hot 100 — already a momentous feat by itself. “Livin’ On A Prayer” did the unthinkable. Bon Jovi became the first hard rock band ever to top the Hot 100 with consecutive singles, and it held the spot for four weeks in an time when runs that long were in short supply. Slippery When Wet went on to become 1987’s single biggest-selling album, and it set the stage for a whole lot more hair-tossing in the years ahead.

Bon Jovi themselves would return to the story of Tommy and Gina more than once. Jon Bon Jovi has said that the band’s 1988 single “Born To Be My Baby” is a sequel to “Livin’ On A Prayer.” The song doesn’t mention Tommy and Gina by name, but it colors in the same musical lines, and it tells of a couple who’s fought through adversity. (“Born To By My Baby” peaked at #3. It’s a 6.) Also, on “99 In the Shade,” another track from the 1988 album New Jersey, Bon Jovi sings, “Somebody tells me even Tommy’s coming down tonight, if Gina says it’s all right.” (Presumably, this means Tommy and Gina had kids. Otherwise, they’d both be there.)

Tommy and Gina also appear on “It’s My Life,” Bon Jovi’s talkboxy 2000 collaboration with onetime hair-metal frontman Max Martin, whose work will appear in this column a whole lot of times. On that one, Jon Bon Jovi sings that the song is “for Tommy and Gina, who never backed down.” That’s not quite the same thing as an ending, but it’s something. (“It’s My Life” peaked at #33.)

Bon Jovi will appear in this column again. They made it, I swear.

BONUS BEATS: Here’s “Livin’ On A Prayer” soundtracking a montage of Hollywood excess in the 2001 movie Rock Star: