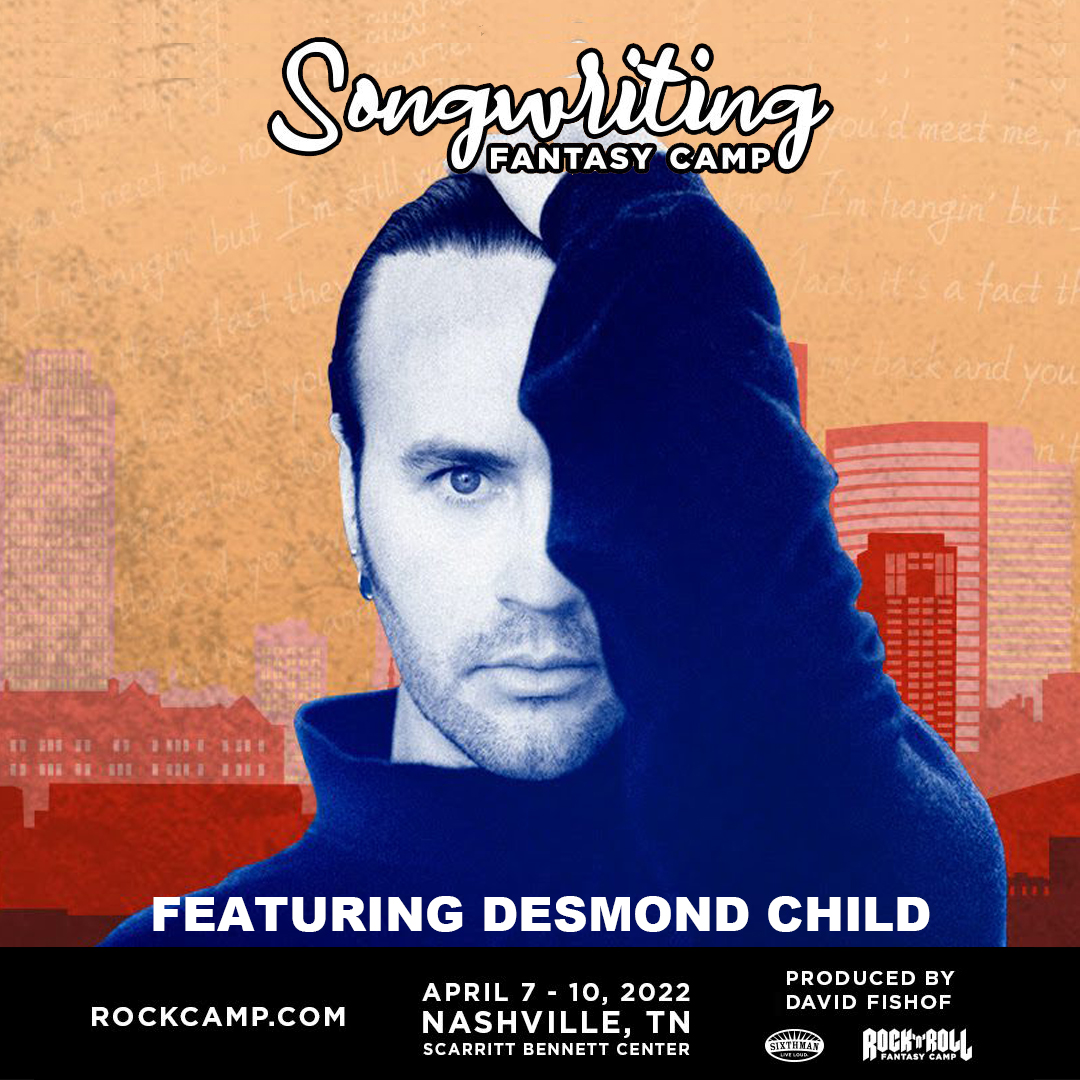 If the story of Desmond Child sounds like the realized dream of almost every songwriter, it is because it pretty much is. Child secured his first hit in 1979 with the KISS song, “I Was Made for Lovin’ You,” and he has kept writing right on through today with “Kings & Queens” by Ava Max, securing the No. 13 spot on the Billboard charts. 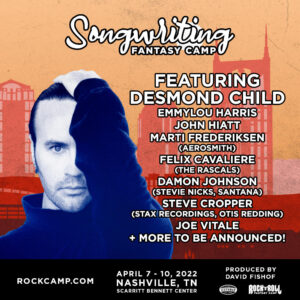 Songwriting Fantasy Camp will begin April 7, 2022, and run through April 10, 2022, in the heart of Music City at the Scarritt Bennett Center in Nashville. Aspiring songwriters from all over the world will gather to learn and write with legendary musicians while having the opportunity to be in front of the top music producers as well as writers whose works have garnered streams in the billions. Some of the incredible talent that will be joining Child are Emmylou Harris, John Hiatt, Marti Frederiksen, Felix Cavaliere, Steve Cropper, and Damon Johnson, among others.

Simply put: this is a chance to learn songwriting from some of the most iconic songwriters of multiple generations.

The opportunity to renounce age and live in the moment is something that Child says has helped him—and can help others—find longevity in songwriting.

“So I never look back. I just keep going and I keep up with culture and what’s happening in the world that I live in. And that’s reflected in the music,” Child tells American Songwriter. “I listen to the music that’s out there. The music that’s making it; the new artists and understand why they’re great, why they work. Why is Billie Eilish fantastic? Why is Halsey fantastic? Why is the Weekend incredible? And really listen to the music. And then a little bit of them stays with me.

“So I’m able to write with young writers and understand the vernacular where they’re coming from. I always say there’s a piece of now in every song. I keep remembering this—‘Okay, the past is past and the future doesn’t exist.’ It’s only always now. It just gets dark and light because we go around the sun. But it’s always, always, always, always now. Things keep changing in the moment,” he adds. “So with that philosophy you have to let go of regrets and mistakes and you have to say, ‘Okay, how am I going to be better today?’”

It is in that vein of daily improvement that the Songwriting Fantasy Camp fills a void. Co-producing the event is Sixthman, an organization known for creating unique interactive festivals at sea and shares in the Rock Camp credo of tearing down walls between artists and fans to create special environments that foster community-inspired experiences. This partnership elevates this special Nashville experience to part vacation and part education.

“This will be a true once in a lifetime experience for campers and we couldn’t be more thrilled to help set the stage for memories that are sure to last a lifetime!” says Anthony Diaz, CEO of Sixthman.

Each day at Songwriting Camp will bring new and exciting activities specifically designed to hone the skills that songwriters must have as they aim for success. Topics of focus include discussions ranging from The Key to Writing Lyrics Before Music, and the reverse, Writing Music Before Lyrics. It will also focus on Co-Writing, learning what it takes to make a great co-writing team; Breaking Down The Hits, where a panel of songwriters take you through the processes, the stories behind them, and the secrets to writing their most popular songs.

Campers will also participate in discussions on Melody and Harmony, Creative Writing and Literature, where they will learn how to unlock their personal stories, poetry and ideas, and turn them into verse. Additional topics include Demo Production, Film & TV Songwriting, the Business of Songwriting and so many more. In addition to the classes, other camp activities include Q&A sessions and clinics—where campers will hear exclusive stories and tips found nowhere else—daily open mic performance opportunities, and the opportunity to write with fellow campers in intensive sessions alongside up-and-coming stars seen on American Idol and The Voice.

The last night of camp will feature the biggest night in Nashville—The Songwriter Showcase, where participants will be performing original music for A&R representatives and music industry executives.

While Covid protocols will be in place, Child believes that the event presents one of the first in-person opportunities, since the endemic began, to mix and mingle with individuals who have similar goals in mind.

“I think the chances of meeting like-minded people are enhanced by coming to a gathering like this,” Child says. “And you’ll lock eyes with somebody and all of a sudden it’s like, ‘Hey, what do you do? What do you play? Do you sing? Oh wow. Can I share some of my music with you? Can we try co-writing a song?’

“I mean, that’s the way it works. It’s like dating, finding somebody. It’s like, if you want to meet somebody who’s single, you go to a singles bar, you don’t go to a bar that’s full of married people,” he continues. “And so going to this gathering, I think it’s going to be great. The electricity, the chemistry, people in a room, it’s different than people in a Zoom—people in a Zoom is like Hollywood squares. You need interaction because you can’t smell the coffee in the other person’s cup. It’s like all of those sensuous elements about being alive and being alive in a room with other creators, that’s priceless.”

Desmond Child & Friends Songwriting Fantasy Camp is a four day fully immersive experience where attendees will write and co-write with fellow campers, and have their material critiqued and assisted by the best. All levels of songwriters are welcome.